I took the train from Nagoya to Osaka in 2nd class as I should with my three-week train ticket. After I switched trains at Osaka to continue my journey to Hiroshima, the lady at the ticket-office apparently booked me a seat in first class for the second part of the trip. Can’t say I had a problem with that, was a very relaxing trip. To be honest, second class is excellent and has more legroom than the Dutch trains in second class. Definitely no need to buy first class, at least I think so. The moment I arrived in Hiroshima I planned to store my bag in a locker and check out the city. Unfortunately, all lockers were occupied. So I decided to go to my hotel on the island Miyajima off the coast of Hiroshima instead.

After another train ride of twenty minutes, I switched to the ferry to reach Miyajima. If you travel with a JR-Pass, it’s valid on the ferry that departs close to Miyajimaguchi train-station. My hotel was just a five-minute walk from the dock, couldn’t have been more perfect. After I had stored my backpack at the hotels bag-storage, I decided not to head out to Hiroshima anymore. Instead, I used the rest of the day to explore the beautiful island. In the small centrum of the village, there were so many food stalls that sold small snacks that I had plenty of delicious things to choose from. One snack, in particular, I was able to get almost everywhere, Oysters. My brother-in-law loves them me on the other hand, not a big fan. I just don’t like them raw! It’s slimy and tastes like I swallow something with loads of seawater. However, these ones were baked. Still, didn’t get one! They looked good though. One thing to be aware of is the deer around here; before you know it your bag is gone.

Supercute of course but they seem to enjoy the taste of bags. Seen entire push carts for kids tip offer. 😀 Don’t worry not with a child inside. Also saw a lady being followed by three deer because she was eating a cob. One tried to steal it from her by standing on his hind legs. To funny! :p

Continued my path to the O-torii gate; one of the main attractions on Miyajima. The gate is 16.6 meters tall and weighs about 60 tons and made entirely out of wood. The roof is made out of Japanese cypress and has a length of 24.2 meters. The O-torii gate is beautiful, especially because of his location in the water with the mountains in the background. Be prepared to see many tourists if you visit the island. But I stayed two nights on the island; most tourists were gone in the evening. So worth it to see the gate by sundown! See the picture on top of this post.

My next stop was the cable car up the mountain, didn’t get in though was way too busy. Forty-minute line. So saved that for the next day.

Once I arrived at the top of the stairs to shrine took off my shoes and entered the library. Hideyoshi Toyotomi tried to build this library. Unfortunately, he died before he was able to finish. Still, a pretty building, I recommend taking a look if you are there.

The five storied pagoda is adjacent to the library. According to the story, it was built in 1407 and in a harmonious way combines Japanese and Chinese architecture. The pagoda is 28 meters tall. The library was prettier than the pagoda though.

Meanwhile, I was sneezing and had a runny nose all afternoon already. Drove me insane. Finally bought a spray for my nose because I was too chicken to buy pills. Well, didn’t help I couldn’t read the label. Next time I make sure to bring my own hay fever medicine. Walked around aimlessly for a little while and ended up at another temple.

After a lot of steps, I entered the temple area. Not much to tell to be honest, besides that I enjoyed the visit. The following pictures will show you. 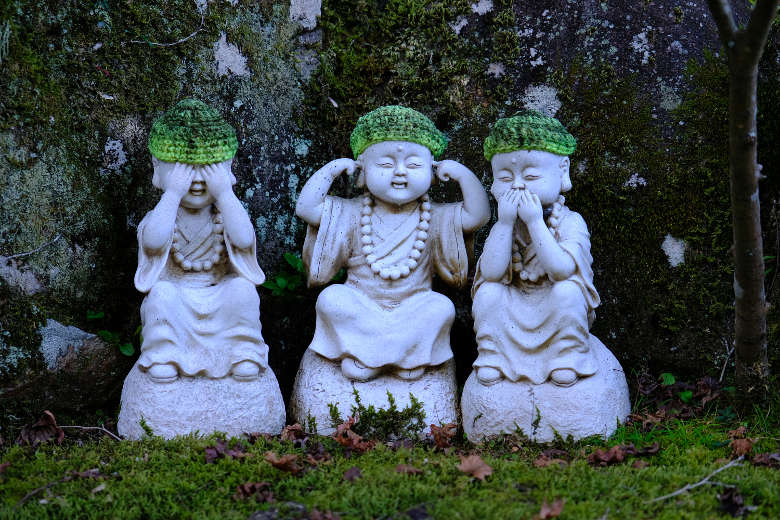 Loved this prayer room, with all the lanterns hanging from the ceiling. 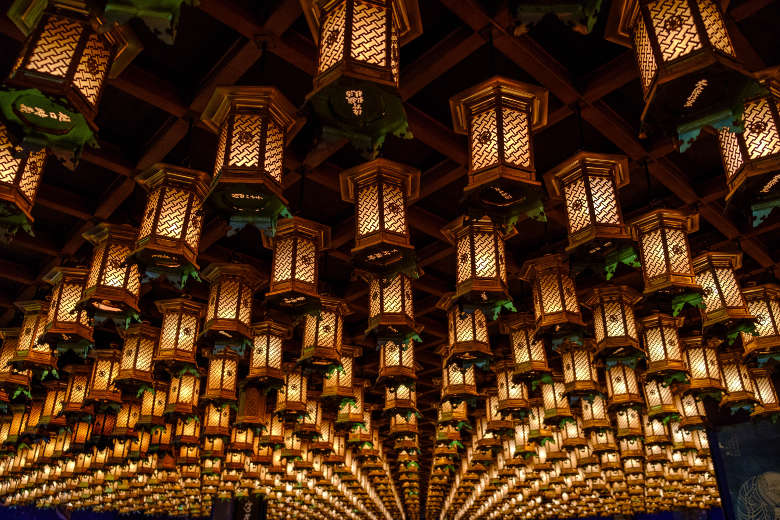 Around dinner time I asked one of the employees of my hotel where I could find the best Hiroshima style Okonomiyaki on Miyajima. Had to have it otherwise my list of things would be incomplete. Somewhere in the back of the small town was the restaurant he told me to go. I was the only customer in there, no problem at all. I think mother and daughter run the restaurant. The food got prepared on a big teppanyaki plate. Ramen, spring onions, eggs, shrimp, bacon, squid, cabbage, and some other things. I enjoyed every bite of this dish. 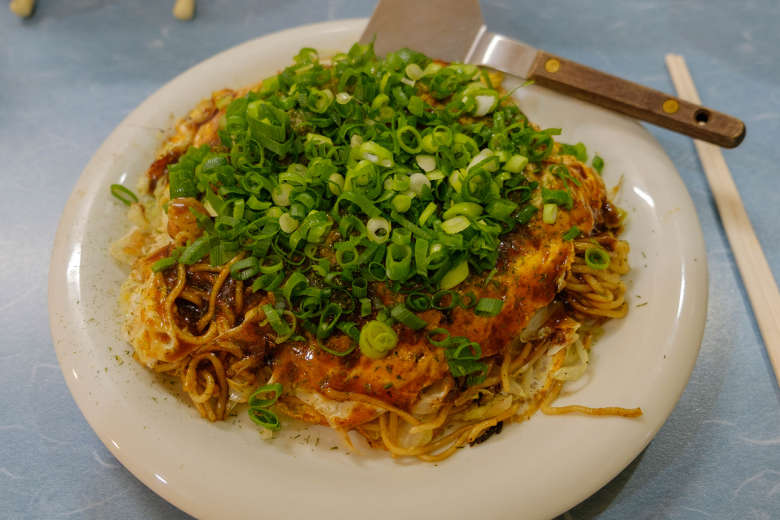 Back in my room, I was warm beyond normal. Fever? Didn’t have a thermometer, so didn’t have a clue. Also, the hey fever got worse, didn’t feel great. Maybe sick instead of hay fever was what I wondered. When you start thinking like that, things won’t get better as you can imagine.

Had to know if I had a fever or not. Took the ferry off the island, went to the grocery store and found out they didn’t sell one. That was me being over dramatic! Back on the ferry and when I walked on the island again, yes, sneezing. Had to be hay fever. 🙂

It was a fun day! The ferry ride back and forward in the evening, well I enjoyed it.

Want to read more of my Japan stories? You’ll find them here.